Second, our problem is that we have been in rebellion against Him since birth. When we look at our self honestly, we see corruption, evil thoughts and/or deeds, and the inability to even keep our conscience clear.

When tempted, no one should say, “God is tempting me.” For God cannot be tempted by evil, nor does he tempt anyone;  but each one is tempted when, by his own evil desire, he is dragged away and enticed.  Then, after desire has conceived, it gives birth to sin; and sin, when it is full-grown, gives birth to death.

Don’t be deceived, my dear brothers. Every good and perfect gift is from above, coming down from the Father of the heavenly lights,who does not changelike shifting shadows.  He chose to give us birth through the word of truth, that we might be a kind of firstfruits of all he created. James 1:13-18

You may ask where did this 'evil' desire of ours come from. Well, it comes from our nature that we have had from birth to be our own boss. It was not so from the beginning. Adam and Eve had the perfect environment, all physical needs met, a perfect marital match, a rewarding purpose, daily time in the very presence of God himself for guidance, instruction, and loving fellowship. Yet with all this bounty, Satan was able to deceive Eve by getting her to question God's motives. That He had all along had the ability to make her a god but was holding out on her. The first lie is actually recorded in Isaiah when Satan proclaims that he will 'be like the Most High'. Although Satan knew quite well that he did not have God's infinite attributes, his rebellion was to deny God's authority and be his own boss. The half-truths that he gives Eve in the Garden were designed to get her to join his rebellion. When she believed him, it created a mindset or condition of the soul that the Bible refers to as 'the world'. That term can be misleading to us westerners because it has nothing at all to do with our planet. It means the principles and philosophies common to all humans when they are born and is described in 1st John 2:16 For everything in the world—the cravings of sinful man, the lust of his eyes and the boasting of what he has and does—comes not from the Father but from the world.

You will notice that Eve had all these viewpoints or conditions in her heart as she was making her decision. At this point she had not yet sinned. Then she acted on her decision and brought Adam into it as well; resulting in the fall of mankind. We too have made choices to be our own boss so we are really no different from our predecessors. The following graphic may be helpful. 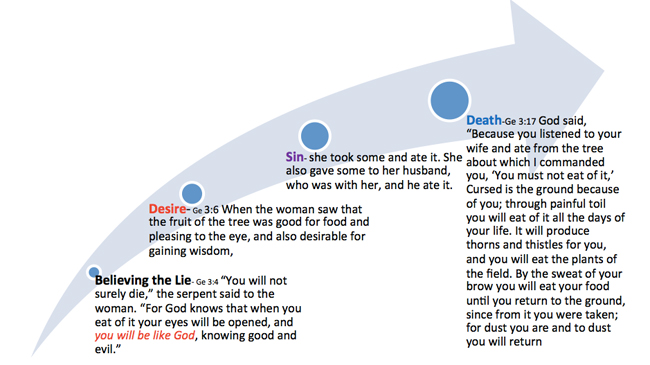